CHAPEL HILL — In the largest donation ever to UNC-Chapel Hill, pharmaceutical executive Fred Eshelman is giving $100 million to the School of Pharmacy that already bears his name. 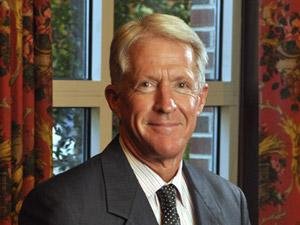 “We must be relentless in our pursuit of pre-eminence — and I mean pre-eminence,” Eshelman said at a jubilant ceremony announcing the gift.

“We must help with the translation of ideas and research into products, into tools for our citizens,” he said. With the leadership on campus and at the UNC Board of Governors, he said, “I think we truly have the prescription for success.”

Eshelman, the founder of Pharmaceutical Product Development (PPD) and Furiex Pharmaceuticals, has already given $38 million, including $9 million for cancer research, to the school where he received his undergraduate degree in 1972. The pharmacy school was named for him in 2008.

Folt said that when he signed the agreement making the gift, Eshelman declared: “I want to supercharge the faculty’s ideas and support their talent.”

The gift will support the Eshelman Institute for Innovation, where University officials envision interdisciplinary collaboration with other schools to take on complex, challenging research.

“It’s going to be used to fuel the innovation, to help spur economic development across the state, and of course to create jobs,” said Folt.

The Eshelman School of Pharmacy already ranks second in the nation in receipt of research dollars. Folt said the school has generated 15 spinoff companies and 131 patents in just the past 10 years.

Robert Blouin, dean of the school, said that when he first met Eshelman in 2003, the executive advised: “Don’t be afraid to take risks. You will not achieve greatness unless you take a chance.”

Eshelman, a former member of the University system’s Board of Governors who has supported conservative political causes, said that in a difficult era for state funding of universities, “The private sector must make the investments like never before.”

“That man believes in and trusts this university,” Ross said. “He knows that the University is the economic engine of our state.”